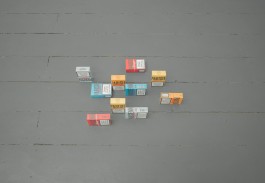 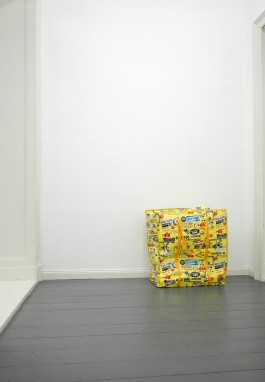 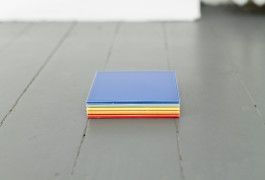 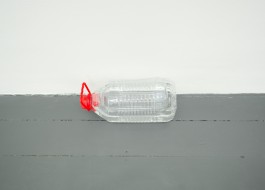 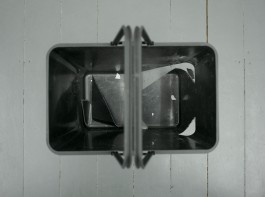 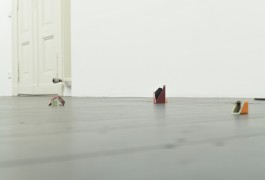 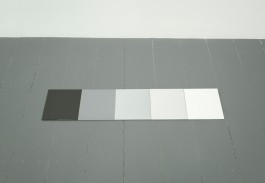 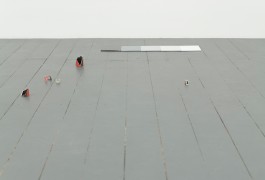 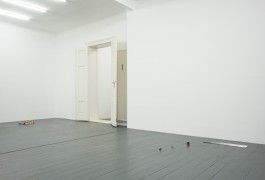 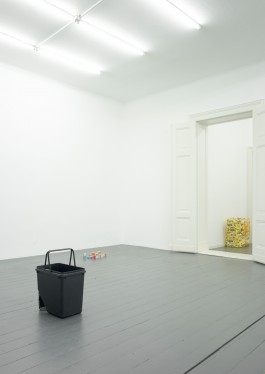 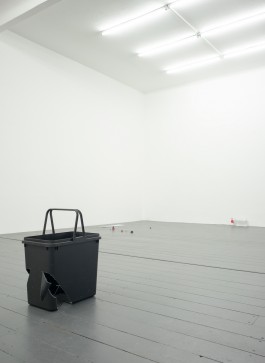 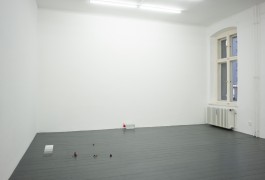 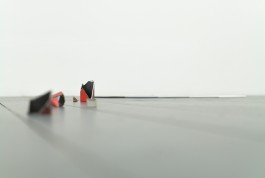 Wall tiles lined up as a grey scale on the floor, or as a colourful stack, forming a compressed gradient. A large bottle of water: inside it, a smaller one is floating. Perhaps the first question that comes to our minds when faced with Hiller’s installation is just what those random things have got to do with one another. Some of us are likely going to marvel about the meaning of it all; others only about what the fuss is all about.

Almost 100 years ago, when Marcel Duchamp under the alias R.Mutt tried to smuggle his ‘Fountain’, an ordinary, industrially produced wall urinal, into the exhibition space, the perceived gap between its function as a commodity - Michael Fried talks about objecthood in that context - and as an art work did lead to the ‘unacceptable’ object not being exhibited at all. So when it did get exhibited shortly afterwards - and  even though this did not happen as planned at the big show of the Society of Independent Artists, but at Alfred Stieglitz’ ‘Galerie 291’ - The Blind Man journal wrote in its issue 2 of 1917 the following defense:

“Whether Mr Mutt made the fountain with his own hands or not has no importance. He CHOSE it. He took an article of life, placed it so that its useful significance disappeared under the new title and point of view – created a new thought for that object.“

What does Marcel Hiller have to do with Marcel Duchamp? Not a lot, frankly. One could hardly speak of an ‘unheard-of event’ as Goethe did in 1827 in a conversation with Johann Peter Eckermann, seeing that we have long since gotten used to common objects found outside the realm of art being re-displayed inside the exhibition space. But neither is an object here, in Hiller’s work, being distorted or given a new name.

Naturally, what we see in front of us can inspire new thoughts, like such about water as a dwindling resource, or about the influx of immigrants, or whatever else may be occupying our minds. The way in which the exhibition opens up into its occupying space where it is taking place, is also the way in which it opens itself to global current affairs. The iconographers amongst us keep researching. On the carrier bag for example they will discover a branded logo spelling Meckey & Dolphin. So this could be the kind of bag in which those who possess no suitcases carry their belongings. And then the iconographers may get confused if they cannot track down this bag manufacturer online, for it does not seem to exist. A wrong trail?

Still it may be yet more interesting to find out what those objects really are after all, in the here and now; seeing they have come into the exhibition space almost accidentally, or aggressively, rather than simply being stuff that was declared to be art. Thinking of Duchamp again one could pose the question if those things in the space actually still qualify as readymades.

So back to the beginning. There are those words we use to catalogue or frame things, or which we use to collect or read them. ‘MADE JUST FOR YOU!’ has been written several times over said carrier bag, hidden amongst its allover print. We can only marvel at this beautiful coincidence which we recognize in the here and now; which becomes apparent or, rather, exists through its appearance.

Because we are all part of what is happening here: the carrier bag, the audience, perhaps the artist also; the gallery as an institution definitely is, all are relying and depending on the existence of the other one. Then there are those additional things that are not visible (anymore) and which the artist took away again. Collection is followed by selection. Destillation. We know that already. And isn’t it strange that the word ‘to read’ can hold such different meanings. Even stranger yet that we feel so awkward around language and its metaphorics, its transference, which will just not leave us alone.  A thought, a word. Body and mind, on the other hand, are irrevocably separated from one another: res extensa and res cogitans, as Descartes wrote.

What would happen if the language of objects started to threaten us? If the things  became disproportionally familiar to us? If we were not able to separate the objects from our thoughts anymore, and if one and one just would not add up anymore? Wot next?