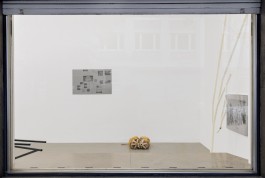 curated by Seda Pesen (scroll down for text) 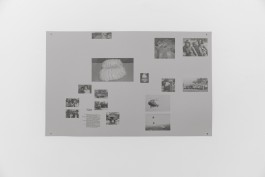 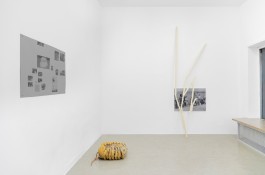 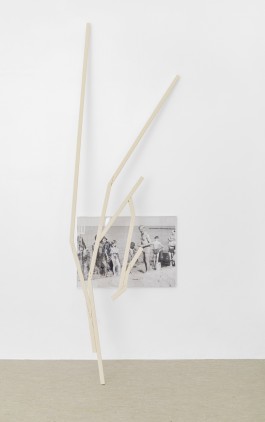 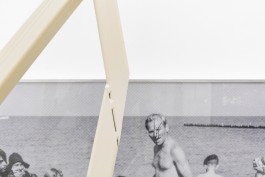 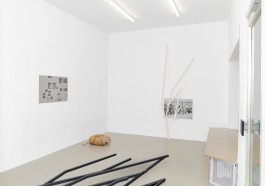 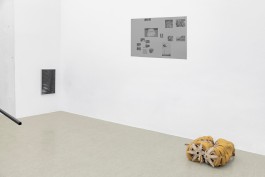 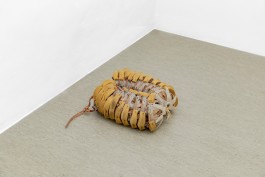 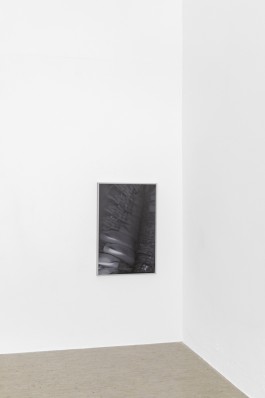 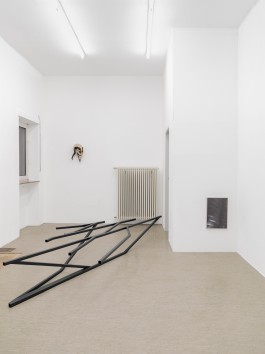 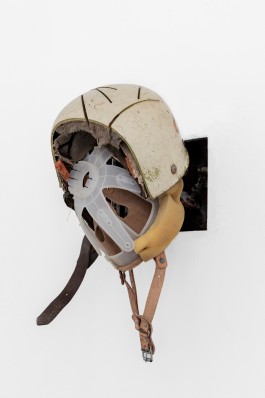 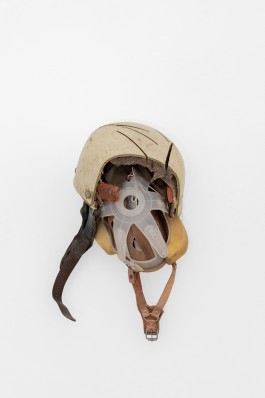 Our skin marks the borders of our fibres. It surrounds our interior and becomes a showing surface: it states the exterior, occupies a space ex negativo and positions us in it. The skin alienates the body; thus, it inevitably has a public dimension. My skin is a political tool. Your skin is what I can see and touch, what asserts your existence in its warmth and corporeality. It reflects to me what I am. Your own body, your own skin is exposed to the gaze of the other: when I see you, I know that you are not me, but I know that I am with you at the same time, just as our skins pull and touch, I know that the difference that stands between us is what enables us to understand ourselves as subjects about the other. Only through confrontation with the Other we seem to understand who we are.

The concepts of the Other and the difference refer to the wound sitting between. It does not stop igniting. The supposed self-understanding, with which we justify ourselves as subjects and dwell in the mode of difference to the other, is at the same time the breeding ground for the conflicts between us. The collective “We” arises through the collective “Other”. In the monograph “Excitable Speech. A Politics of the performance.” (1997), the philosopher Judith Butler considers this as the origin of several forms of violence. They aim at the vulnerability of the body and legitimize themselves through the observation of the Other.

The title “less skin” of the solo exhibition by artist Marcel Hiller (*1982, Potsdam) refers to the multi-layered ambivalences of skin and its political and politicized dimensions. Upon entering the exhibition space, one is immediately confronted with a metal object set on the floor that blocks the direct path to the exhibition. Grey square tubes slide away from each other and run towards each other. The object (2019) is an image of the word “skin” and bears the same title. Cool and rigid in its feel, it refers to human skin as such, without mimicking it and is able to contradict it as well. “skin” inscribes itself into space and asserts against the vulnerability of our skin. Leaning against the wall is the work “less” (2019). In a matted yellow, also made of square tubes, it writes “less”. The term “less” can be used in English as an independent adjective to describe a quantitative decrease, or as an appendix to a term to describe the complete absence of something: “less skin” means less skin, “skinless” would describe the condition skinlessness, a being without skin. Those concepts, “less” and “skin”, which inscribe themselves as atmospheric charges in this exhibition space, leave the self of this exhibition in a mode of ignorance. They lay themselves over floors and walls, over our skin, through our presence. They state the skin as a subject through their object-being, making being less an entity.

In the niche of the exhibition room, next to a small window, is a helmet, hung on the wall. The hard surface of "Perfekt" (2019) shimmers white and is covered with light layers of dirt. Leather straps hang from the sides of the helmet. A large piece was taken from the helmet; the different material layers are visible. An added inlet hangs out. Above it is provided with straight-lined, clean cuts. In its usual function, a helmet should protect the head of the wearer from injuries, save the fragile centre. Here, Hiller turns the headgear that was originally conceived as military protective clothing into an injured object whose interior, consisting of soft fabrics, has been exposed. The cuts become gestural wounds: they alone, and not the helmet as a whole, are the memory of the actions by which they were created. Thus, they are not only existing; they rather show and negotiate their own vulnerability. On the floor are helmet inlets ("Inlets", 2019) lined up one after the other, which are held together by a string. Opponent to this is a photo scan of these inlets framed in aluminium ("Scan", 2019) on the wall. These frayed doublings behave like blurred mirror images of each other and ask: what or who am I? Far from the military connotation or the functionalization as an object of protection, which inevitably evoke associations on both sides with forms of violence, war violence, sudden violence, everyday violence, the inlets develop from what we understand as the everyday into poetic images. Hanging on the wall, they lose themselves in modes of subjectivation; as a fallen tower on the floor, they become aestheticized design objects; after all, the photo scan is difficult, its dark, dripping, milky coloring is evoking an almost kitschy, fetish-like form of confrontation with this interior.

The work “less skin” (sheet one) (2019) does not seem to dissolve in frayings, but in particularizations: various black-and-white photographs, different in size, are depicted on a grey cardboard. Some of them are upside down, lie on their sides, or are almost unrecognisably small. As anonymous photographic material they all show several situations in and from the German Democratic Republic (GDR). Hiller specifically selected photographs that, because of what they depicted, were not directly socio-historical: no characteristic situations, symbols, or persons were depicted. The juxtaposition of these photographs, consisting of advertisements, military propaganda, school slide shows and holiday photographs, spans a network of historical references that move into the present day. The present is we, the past the others. Past and present interweave in a clash to form a heterogeneous complicity that turns out to be more difficult than assumed and does not linger in the "we" and "the others". The Italian philosopher Giorgio Agamben described this elective affinity: only if we understand that the present lies in the dark, cannot be reached, and that the only possibility of perspectivation lies in the connection with the past, we can see the present as such. We are the past and the present, and the so-called “Others” merge into us. Past political systems and social formations have an indispensable relevance for the present. Even if this thought seems banal, current debates and conceptual fixations around "the East" make it clear that the GDR is still regarded today as a closed, failed system – though their traces still run through us. Hiller takes uo this point with “less skin” (sheet one): he gives us a conglomerate of images that refuses a clear classification, demands a confrontation with the past in order to perspectivize the present and thus at the same time to discover that our supposedly enlightened self-understanding is only supposedly revealed as such.

To understand what it means to be contemporary means to understand what it means to be anachronistic. At the same time, it means that the ego - which demands this setting of the present as an anachronistic understanding of time, which is not based on nostalgia, but rather on a desire for an indispensable relativity - penetrates itself through the other in this way. Judith Butler described this in “Violence, Mourning, Politics” (2005): “I notice that my formation involves the other in me, that what is strange about myself is paradoxically the origin of my ethical connection with others. I do not know myself through and through, because part of what I am consists of the enigmatic traces of others”.  Perhaps this is precisely the starting and ending point of these reflections about Marcel Hiller's works: they turn the everyday, penetrate the ordinary, paired forms of violence in poetic forms into destroyed traces in space, linger in cryptic typographies, without releasing their demands for the dissolution of "we" and "the others", and without the ego becoming an unconditional resonance space. Rather, it becomes an ego that consciously positions itself in its uncertainty about your you and sinks into the skin of the other.